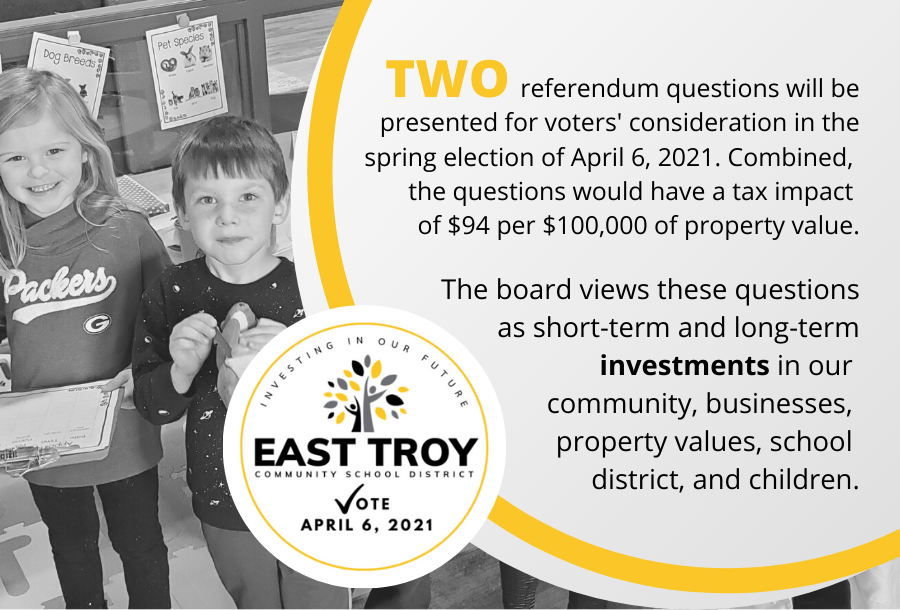 We’ve all been told since elementary school that voting is our civic duty.

If you care about East Troy, casting a vote in local elections on April 6 is a must.

You will be deciding who is responsible for many of the government functions that impact your daily life.

Facing a financial squeeze with state revenue caps not allowing it to keep pace with rising expenses, the first question is asking voters to approve an operational levy for a five year term.

A second question will also appear on the ballot seeking $8 million for a wide range of capital projects.

Q. What are the East Troy Community School District’s needs?

In Wisconsin, the amount of money a school district receives is restricted by a state-imposed revenue limit, also known as a revenue cap. Every district has its own revenue limit.

The East Troy Community School District revenue limit has always been lower than most other districts.

This is because when the state created revenue limits in 1993, low-spending, frugal districts like ours were locked into a very low limit. In fact, only 15 percent of the schools in Wisconsin had a lower revenue limit than East Troy in 1993.

As a result of being locked into a low revenue limit 27 years ago, our district has one of the lower per-pupil revenue limits in southeastern Wisconsin.

In 2017-18 alone, East Troy would have had $1.2 million more dollars if just at the state average.  Over the course of 25 years this gap represents $26 million.

Q. Didn’t the community recently vote on a referendum?

Yes. The ETCSD community voted on a proposed operational referendum question in April 2020. That question did not pass, and the district was unable to address our larger maintenance projects.

We moved forward with addressing the 2020-21 deficit by reducing seven staff positions, making reductions to employee health insurance, and enacting salary freezes for the 2020-21 school year.

In the months after that vote, the School Board got back to work to find a new solution to the district’s financial and facility needs. The result of these efforts is reflected in the questions being presented for the community’s consideration on April 6.

Q. Why are the district and board moving forward with these proposals now?

East Troy’s schools continue to experience financial and facility needs that will continue to persist unless our community addresses them.

The board recognizes the impacts that addressing ongoing structural deficits through reductions to staffing and programming have on our students, schools, businesses, and community. We must act with urgency to ensure a quality educational experience for our students while maintaining the attractiveness of our district and protecting property values.

While the board understands that we are in an unknown time because of the pandemic, now is also an ideal time to act, considering the extremely low interest rates we are currently seeing.

Q. Has the district tried other cost-saving measures to address its financial needs?

The East Troy Community School Board has implemented $8.2 million in budget-balancing efforts over the past 14 years.

Each and every year, the board has taken the revenue cap gaps (the difference between increased costs and minimal, if any, revenue increases from the state) and balanced our district's budget.

This has included changes and reductions in all benefits packages—including health, retirement, dental, and life insurance—along with moderating wage increases. These measures lead to challenges in attracting and retaining high-quality staff in a competitive and transient labor market.

Q. What is the current property tax rate in East Troy?

Q. What would be the tax impact of the referendum questions?

If both questions are approved April 6, they would have an estimated property tax impact of $94 for every $100,000 of assessed property value.

The cost of the two referendum questions would be offset with a refinancing process on our current debt and capitalizing on currently low interest rates.

If only the operational question passes, but the capital question does not, the estimated tax impact would be $84 per $100,000 of assessed property value over the next five years.