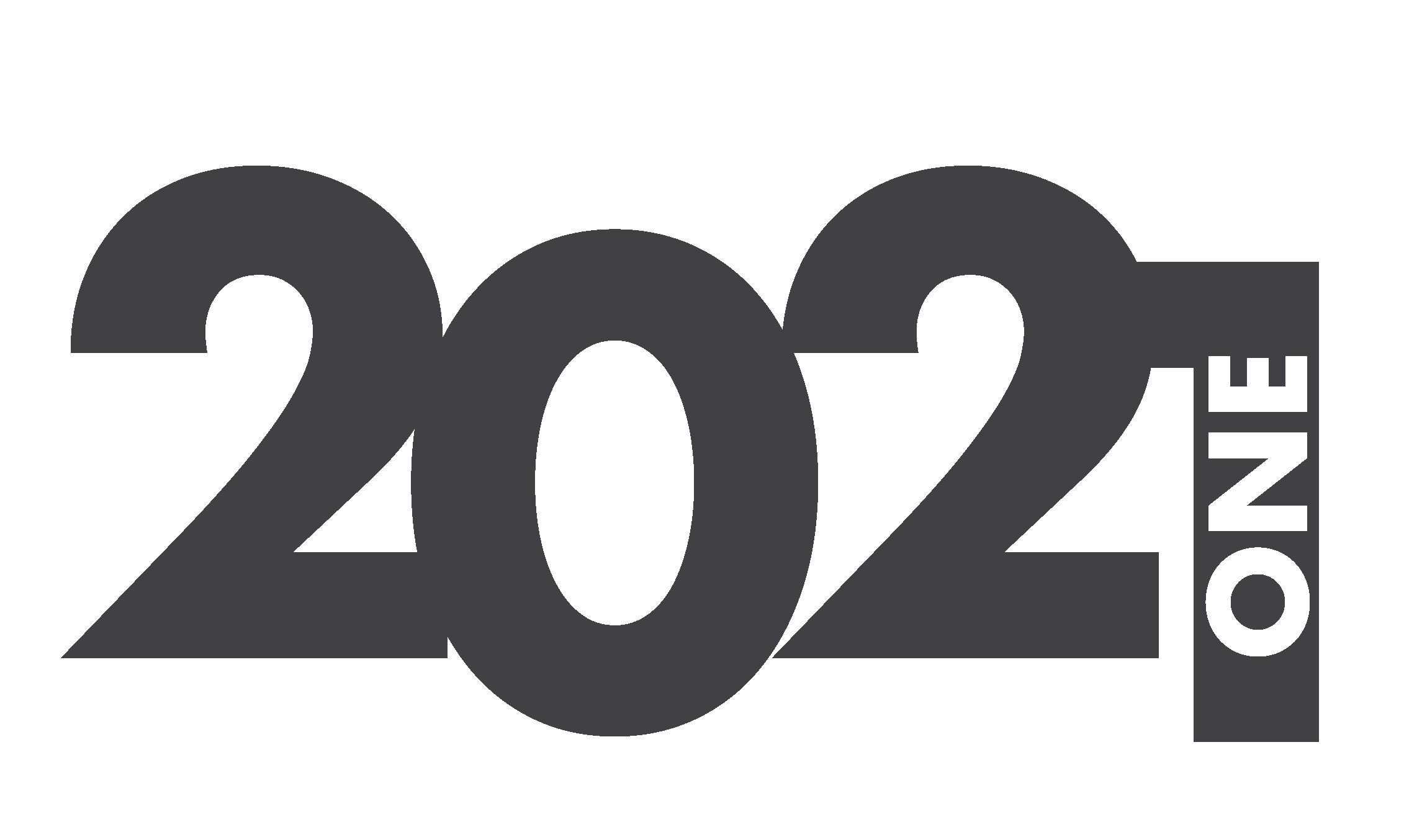 In a year that brought a long list of obstacles, the East Troy community more than responded to the challenge.

Since it's Homecoming Week at East Troy High School (see details here), we thought it would be fun to immortalize some of this year’s standouts with coveted senior yearbook superlatives.

Thanks to our Class of 2021 for keeping us inspired, well fed, informed and distracted.

* P.S. If you didn't make the list, it doesn't mean we don't love you!
Please continue to send us the cool stuff you are working on and we will feature you in another way :) 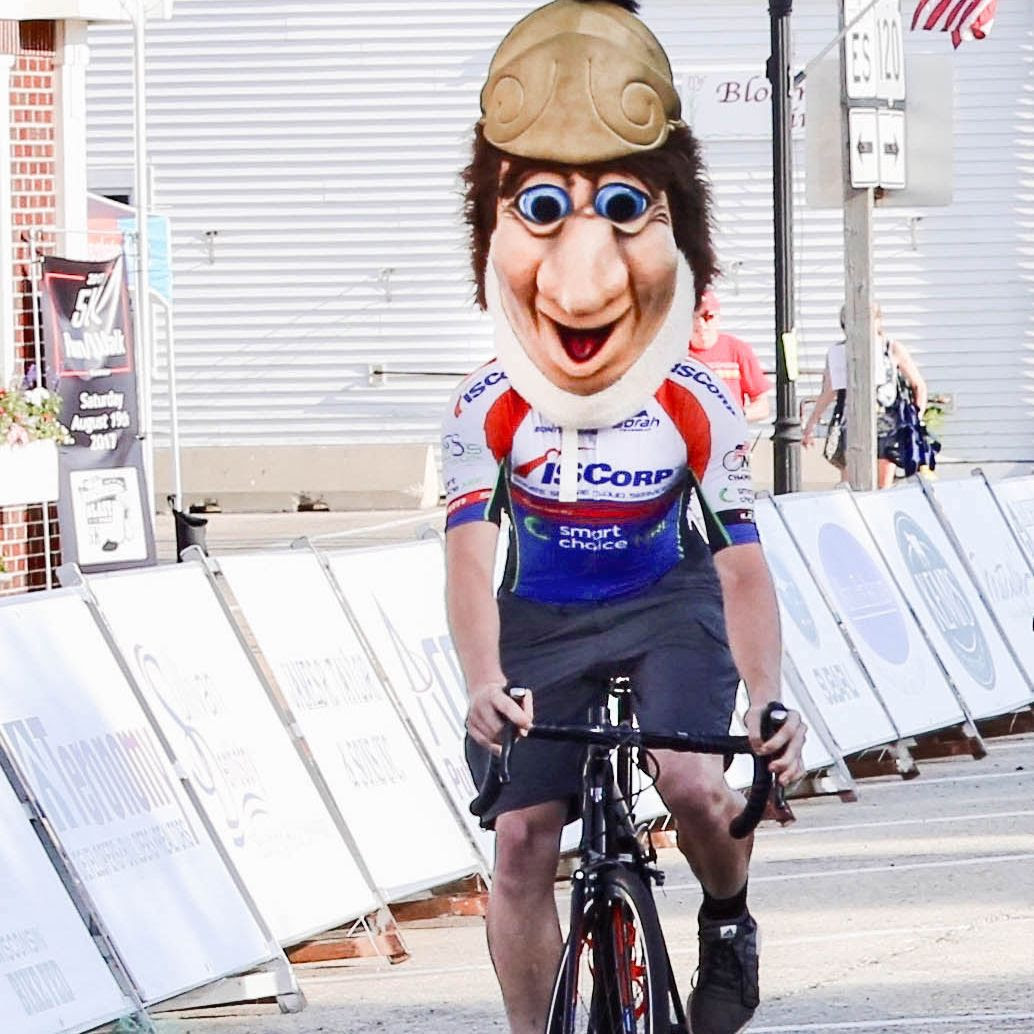 East Troy High School’s Trojan mascot has racked up quite a fan base by bringing the party to every single game.

The Trojan warrior, an abnormally large version from the ancient city of Troy, is a cherished fixture at the East Troy High School sports stands.

Get the fall sports schedule at easttroy.k12.wi.us.

Most Likely to
Shatter the Glass Ceiling 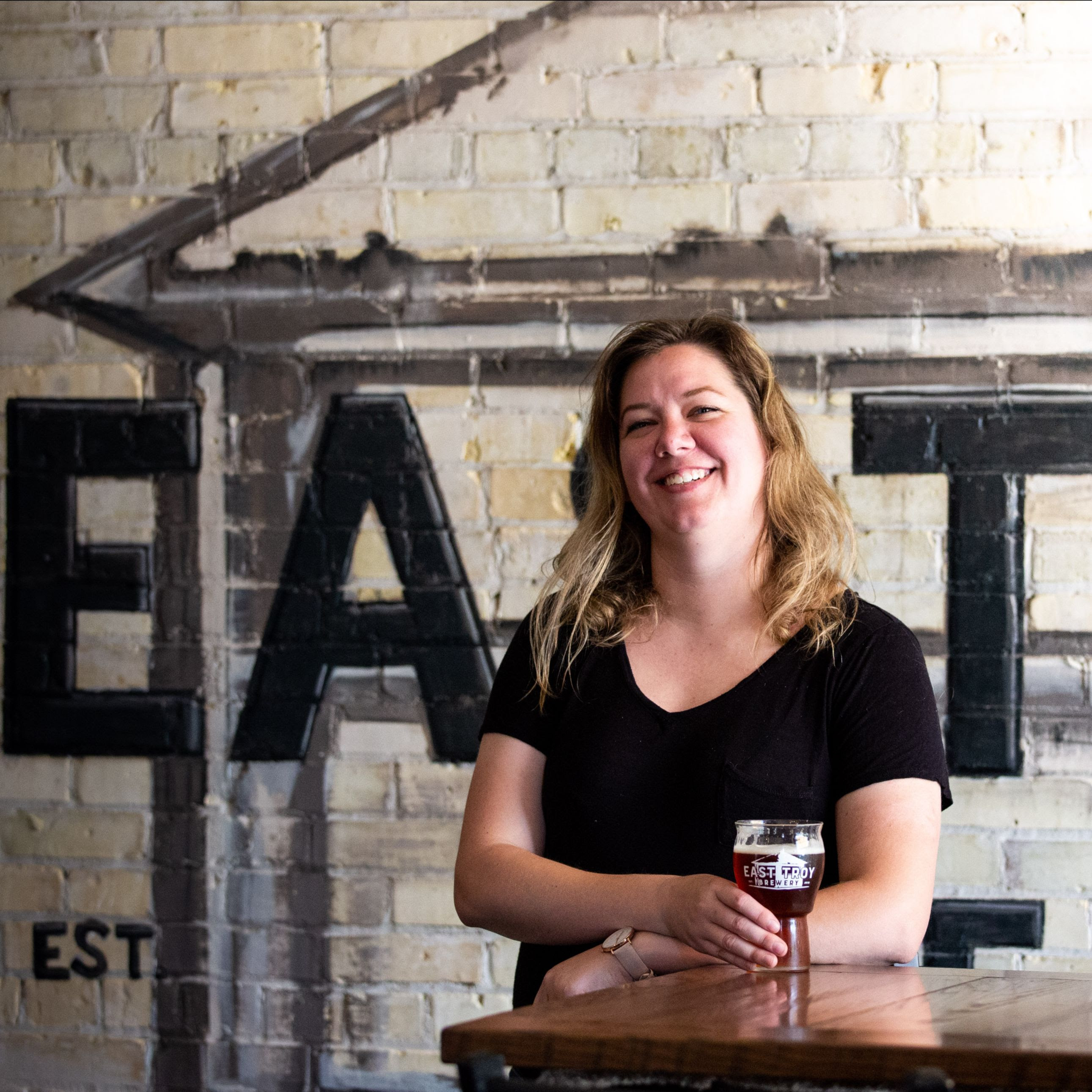 This spring East Troy Brewery named Shay Leamon as head brewer at its operation, which occupies the northwest corner of the East Troy Village Square, and so far, it’s been a game changer.

Leamon grew up in Wisconsin, but definitely serves some cool and laid-back West Coast vibes.

Her unique style in the beer scene feels authentic.

Leamon doesn’t make a big deal out of being a leader in the male-dominated world of craft beer (even though she’s happy to represent a foot in the door for women).

“There are a lot of people who are surprised that I make the beer,” Leamon said.

According to Leamon, only about 4 percent of craft breweries have a female head brewer at the helm.

Leamon, who has been making waves in craft brewing for years, really cares about beer whether it’s discussing the trending fascination with new beer styles, understanding beer history or mulling over complexities from aroma to texture to flavor.

Now that she’s running the beer show at East Troy Brewery, 2905 Main St., Leamon is already making brews that you want to drink again and again, including Because Dinosaurs, a fast fan favorite, and Helles of Troy, a nice German lager that is best after a long day.

Leamon said she’s focused on creating the perfect beer and food pairings for the foodie-friendly brewery.

“I’m really focusing on what pairs nicely with the restaurant and having things that complement our menu here,” she said.

Find out more at etbrew.com. 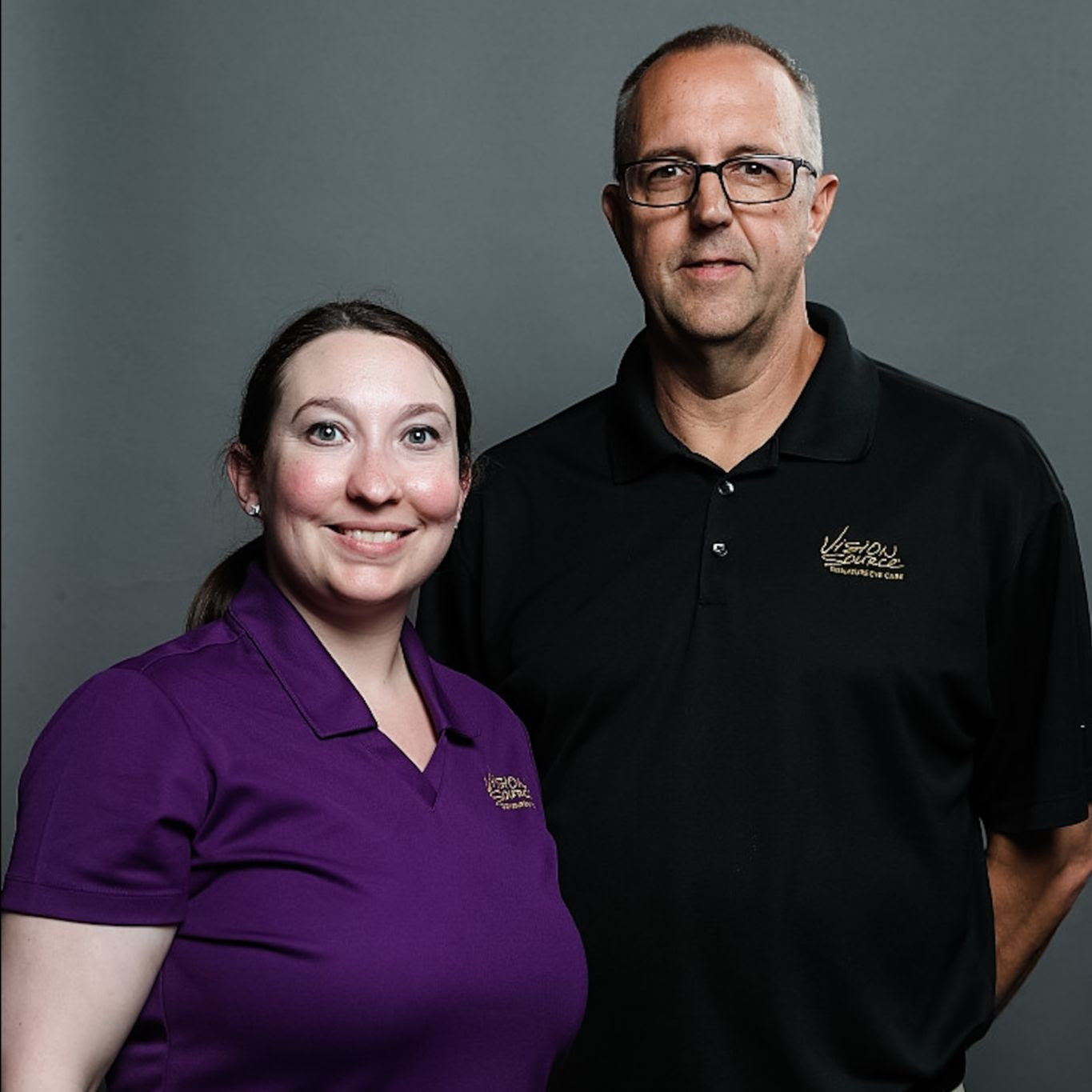 Taking care of your eyes is important and finding the right doctors can make a difference. Luckily, East Troy is home to Koskinen Eye Clinic, 3278 Main St., Suite B, where staffers are known for making meaningful connections with their patients.

Koskinen offers comprehensive vision examinations and specializes in the diagnosis and treatment of a wide array of eye diseases, conditions and problems. For more information, visit visionsource-koskineneye.com. 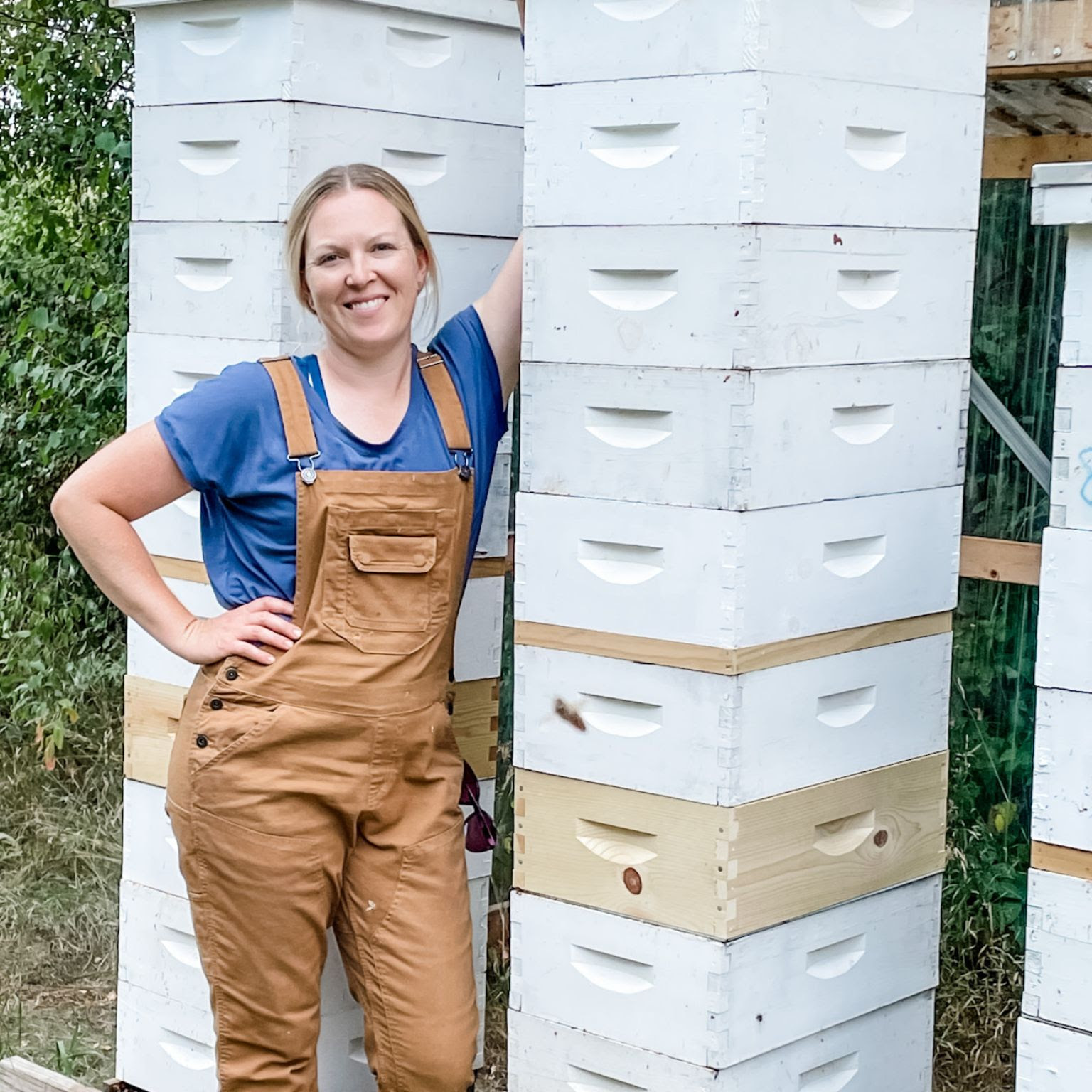 Pivoting from equine veterinarian to beekeeper doesn’t just happen overnight, but as The Hive Taproom owner Ayla Guild has found, it does require a lot of hard work and resiliency.

Ayla’s love affair with bees began in 2017, a year before she and husband Tim Guild opened The Hive Taproom in summer of 2018.

The Guilds said the timing was right for the business with the popularity of craft beer in the area and the resurgence of interest in mead (produced by fermenting honey with water and adding other ingredients).

Ayla said she was immediately attracted to the idea of learning the ancient craft.

“I wanted to learn how to keep bees not only for the honey, but mostly to keep them healthy. As a veterinarian, I have a soft spot for animals who are struggling and when honey bees made national news for Colony Collapse Disorder, I knew I wanted to get involved.”

After studying under Dan O’Leary of Honey Valley Beekeeping, Ayla has established herself as a local heavyweight in the industry.

She currently manages 50 hives, of which about a third are located on property next to Honey Creek. Ayla and friends planted over 250 native Wisconsin perennials in the pollinator garden next to the Taproom that she continues to expand.

The Hive’s honey is for sale inside the Taproom. For more information, visit thehivetaproom.com. 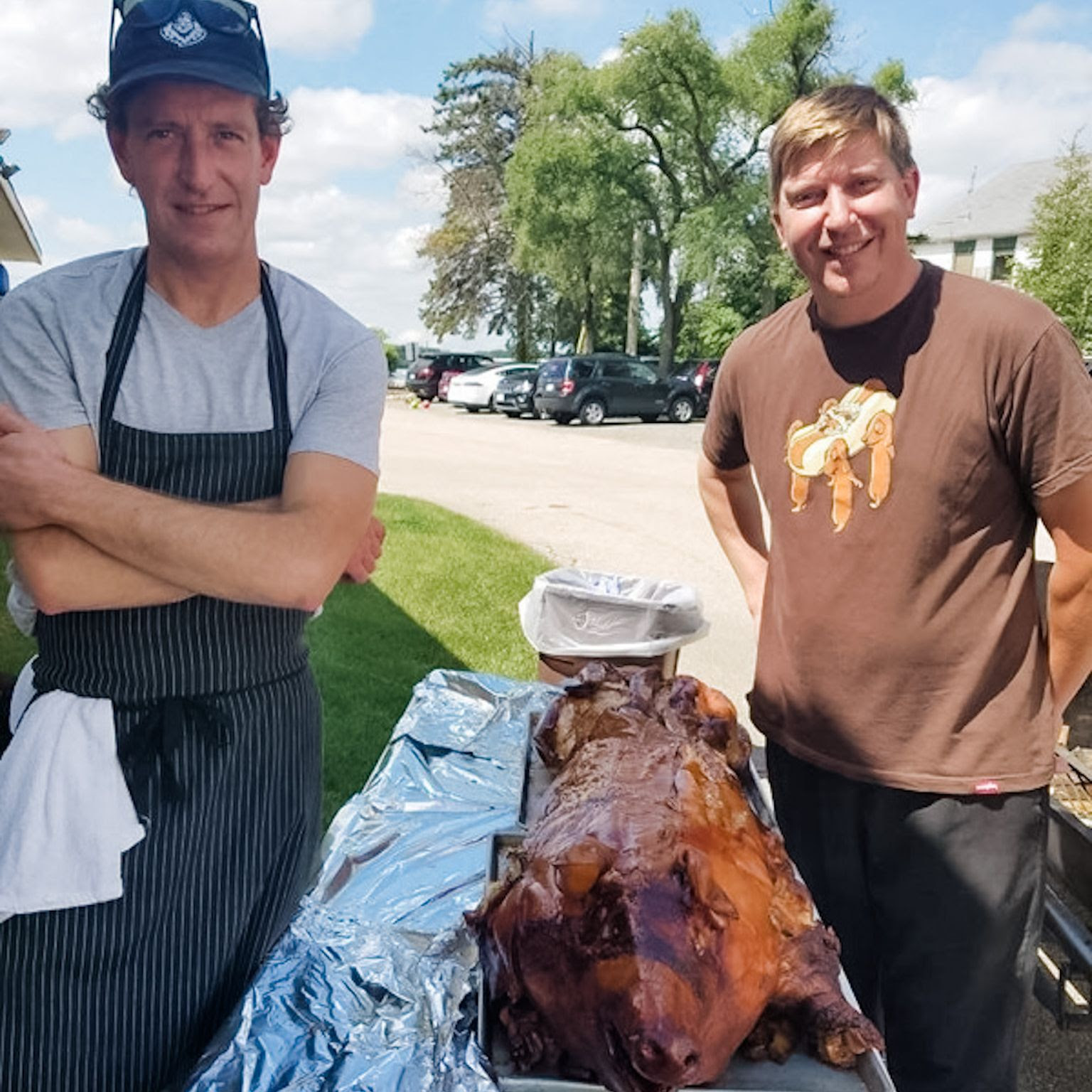 It’s safe to say that John Hudoc and Thomas Cicero have the best bromance in all of East Troy.

The professionally trained chefs (along with John's wife Elena Bisabarros) run Hometown Sausage Kitchen – whose blossoming in recent years has continued to attract attention from Wisconsin farmers, the southern Wisconsin restaurant scene and beyond.

East Troy doesn’t hold back sharing the love for the duo who are often seen out and about with John's family doing custom work for farmers like LotFotL and suppling events like area farmers markets, the East Troy Chamber’s Memorial Day Weekend Corn & Brat Roast, East Troy High School concession stand and many others.

After purchasing its East Troy shop at W1184 Co Road L in 2011, Hometown Sausage made a push to modernize the business by developing and evolving its wholesale division.

Today, the business is supplying its products to trendy restaurants Good Kind in Bayview and Braise in Milwaukee. It also expanded into national territory by supplying a stadium in Cleveland and another large East Coast client.

Most Likely to be Famous 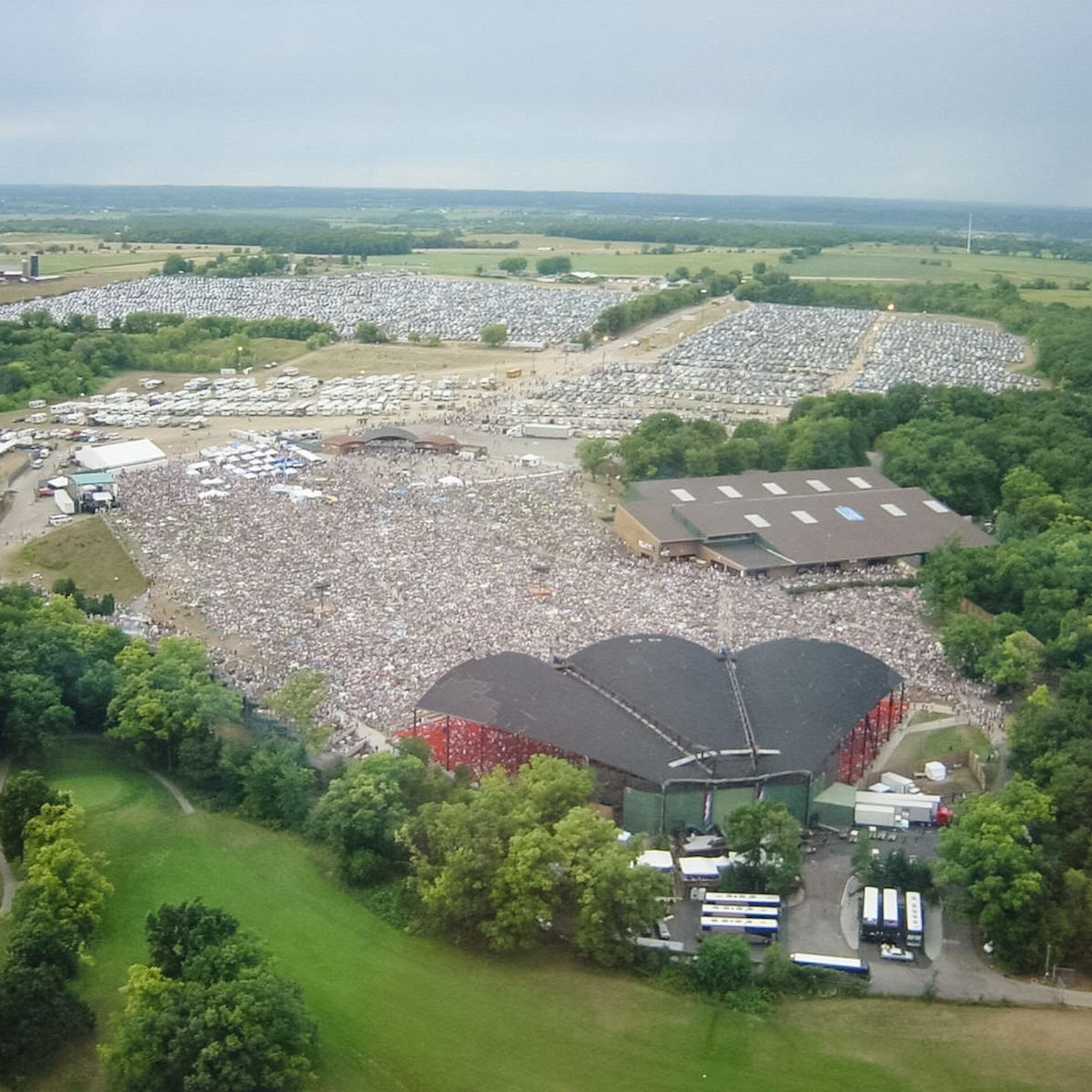 Alpine Valley Music Theatre, one of the largest outdoor amphitheaters in the country, gives fans the chance to see star-studded bands while surrounded by its signature hills.

During its 40 years in East Troy, Alpine has been East Troy’s claim to fame, bringing in some the biggest names in music to town – from Stevie Ray Vaughan to the Grateful Dead to Madonna to Pearl Jam to Neil Young – and giving East Troy press in some of the biggest publications in the country. 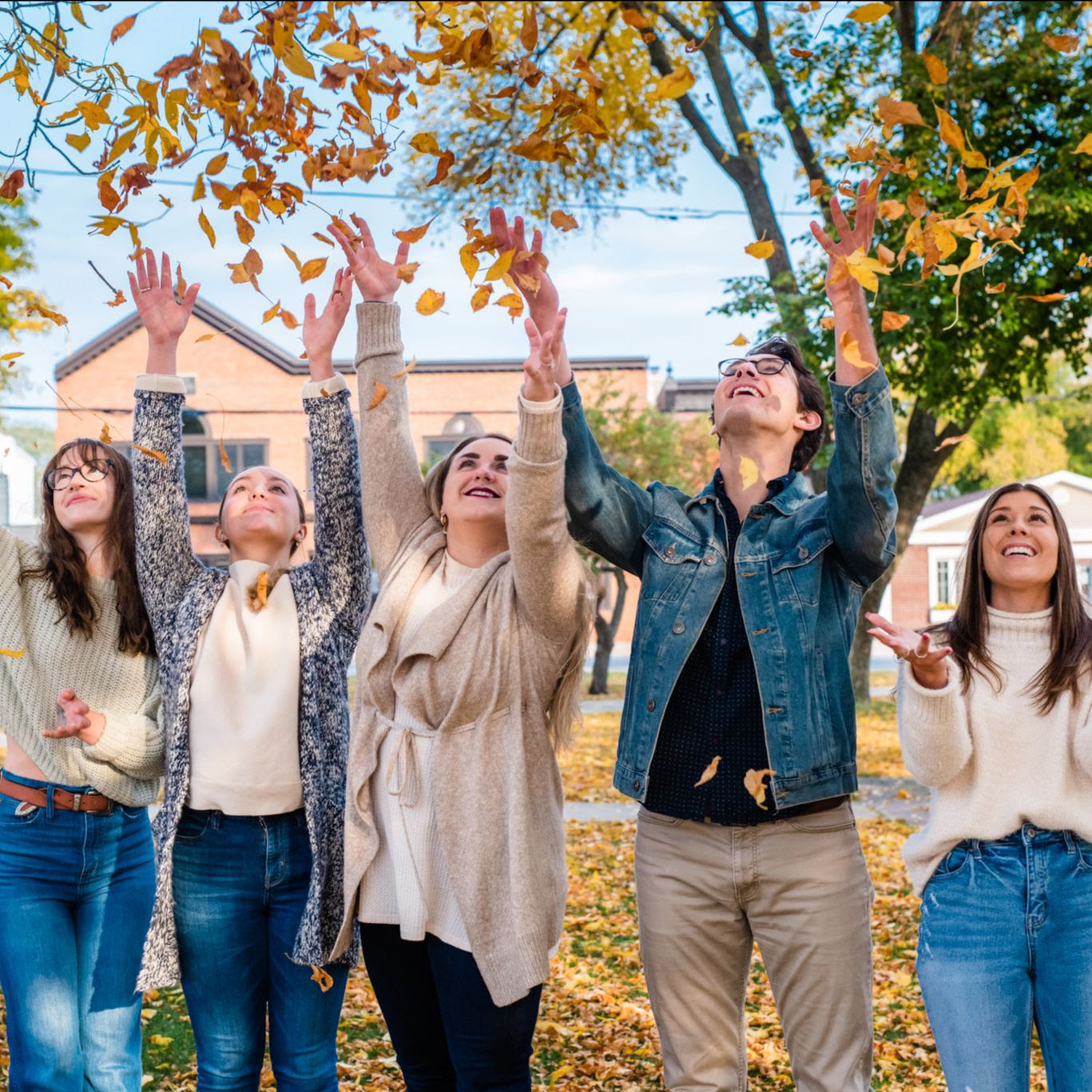 With the goal of sharing its deep love of dance with more people, Infinity Dance expanded to East Troy at the start of 2019.

Since then owners Gina and Carissa Chanos, a mother-daughter duo, have established their boutique-style studio as a fixture within the East Troy community.

It hasn’t been easy as the dance industry has dealt (and continues to deal) with unprecedented challenges.

The Infinity team has worked extra hard to create a community-based studio with dancers continuing to safely perform at recitals, as well as special events (including the debut of East Troy Lights in 2020). Infinity Dance offers classes that broaden the spectrum to create the complete, well-rounded dancer – ballet, jazz, tap, hip hop and more! They also have excelled in the competitive dance arena taking home multiple highly regarded platinum and choreography awards.

The studio, located at 3278 Main St., welcomes first-time dancers looking for fun, as well as advanced students in every age group.

Registration is available at infinitydancewi.com. 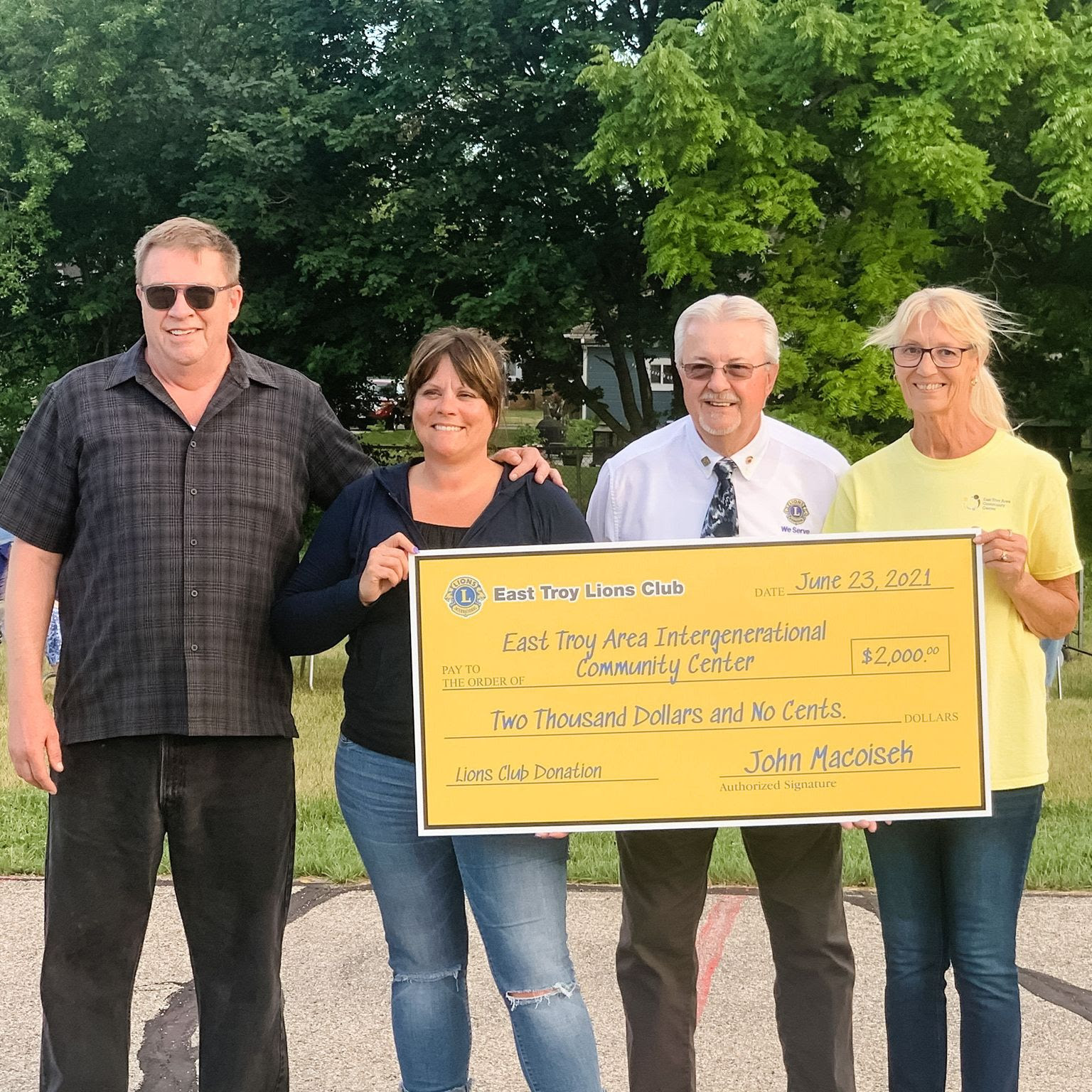 With its motto “We Serve,” the East Troy Lions Club has been at the helm of East Troy’s giving scene for over 64 years.

During the Club’s tenure, members have financially aided local organizations, provided scholarships and helped to fund an assortment of projects (like the construction of a Youth Center in the late 1960s, which was later donated to the Village of East Troy in 1979 and is now the East Troy Lions Public Library). Often working quietly behind the scenes, the club has been instrumental in many of the notable accomplishments in the community over the years.

The Lions sponsored East Troy’s July 4th celebration, including the ETBT, is an East Troy staple and has expanded with a Fall Fest ETBT in October. For more information visit easttroylions.org. 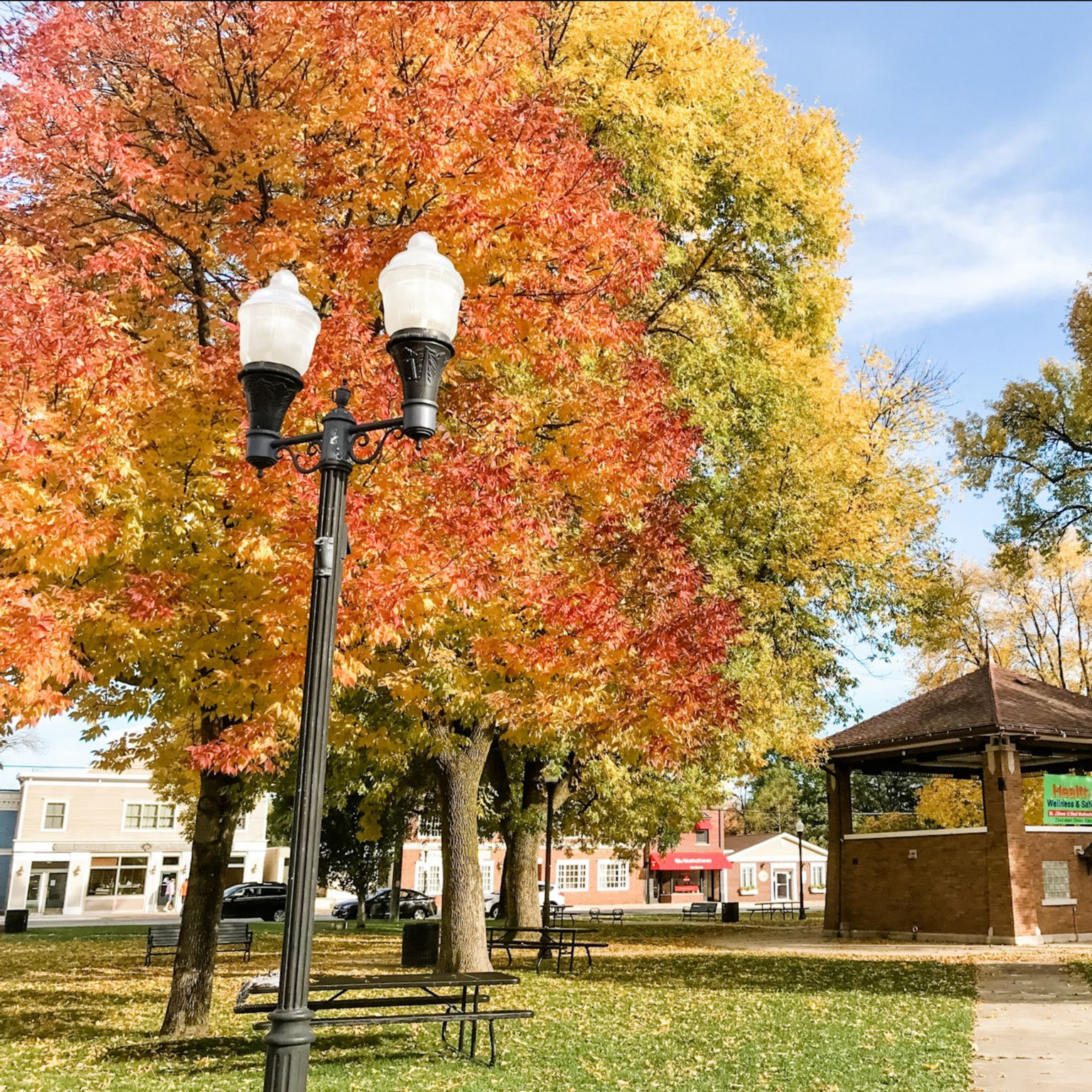 If you journey to surrounding businesses, you’ll also find historic attractions, high quality dining and everything you need for a perfect day or night away.

Dan Moody, Home on the Square 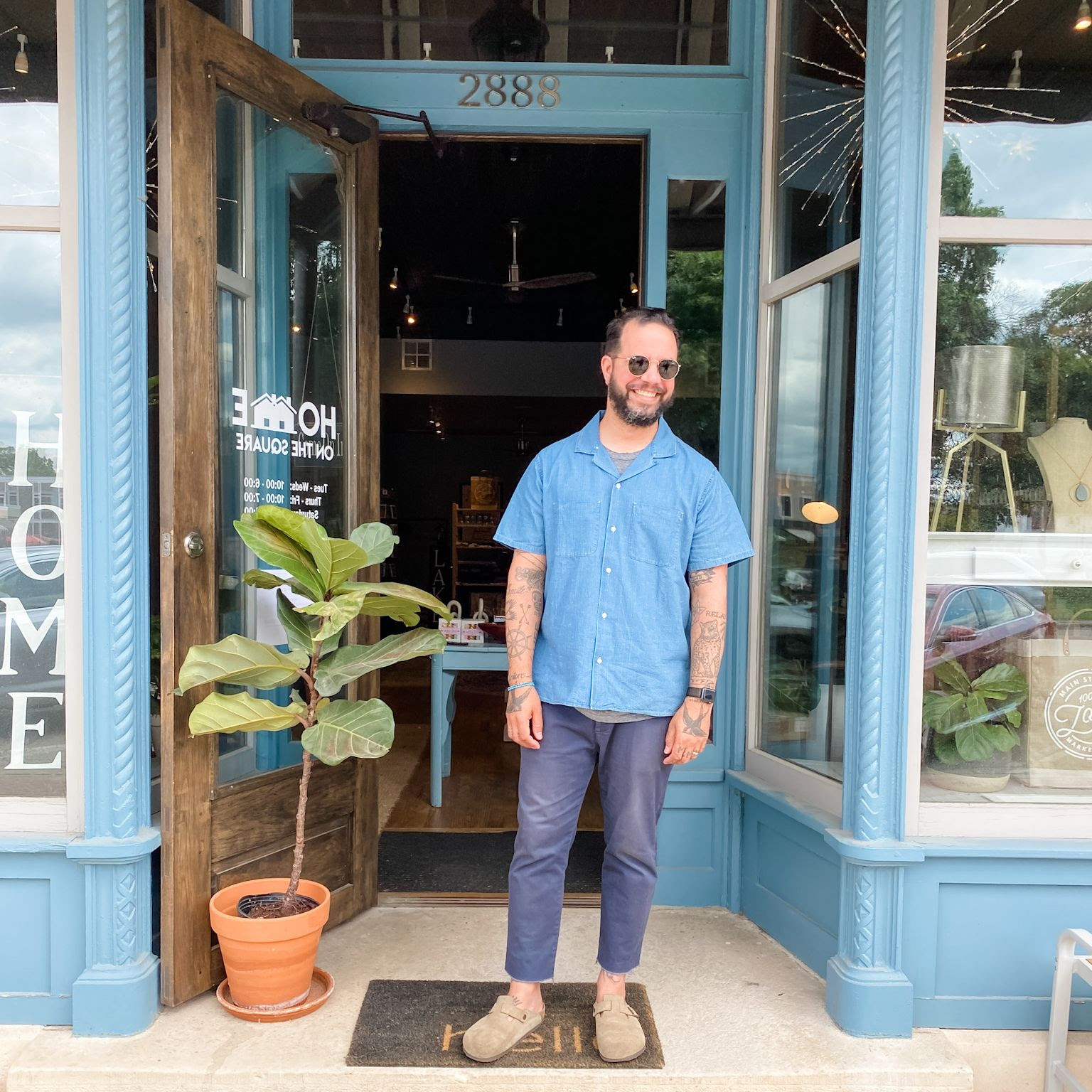 There’s an undeniable correlation between coolness and Dan Moody, general manager/buyer at Home on the Square.

Since opening up shop on the square at 2888 Main St. in early 2019, Moody and business partner JoAnn McCormack have managed to quickly make Home on the Square East Troy’s go-to stylish place to shop.

Did we mention Moody, a Cleveland native, who’s lived everywhere from Brooklyn to Los Angeles to London to Chicago to Kansas City, runs the store’s gorgeous Instagram feed as well?

Moody, who has worked in the fashion and entertainment industry for over 20 years, posts new items regularly on Home on the Square’s page. You’d be hard pressed to find a more beautiful selection with a feed adorned with plant drops, jewelry and home and gift items sourced from a mixture of the East and West coasts and Wisconsin-based artists and companies. For more information, visit homeonthesquare.shop.

Most Likely to
Travel the World 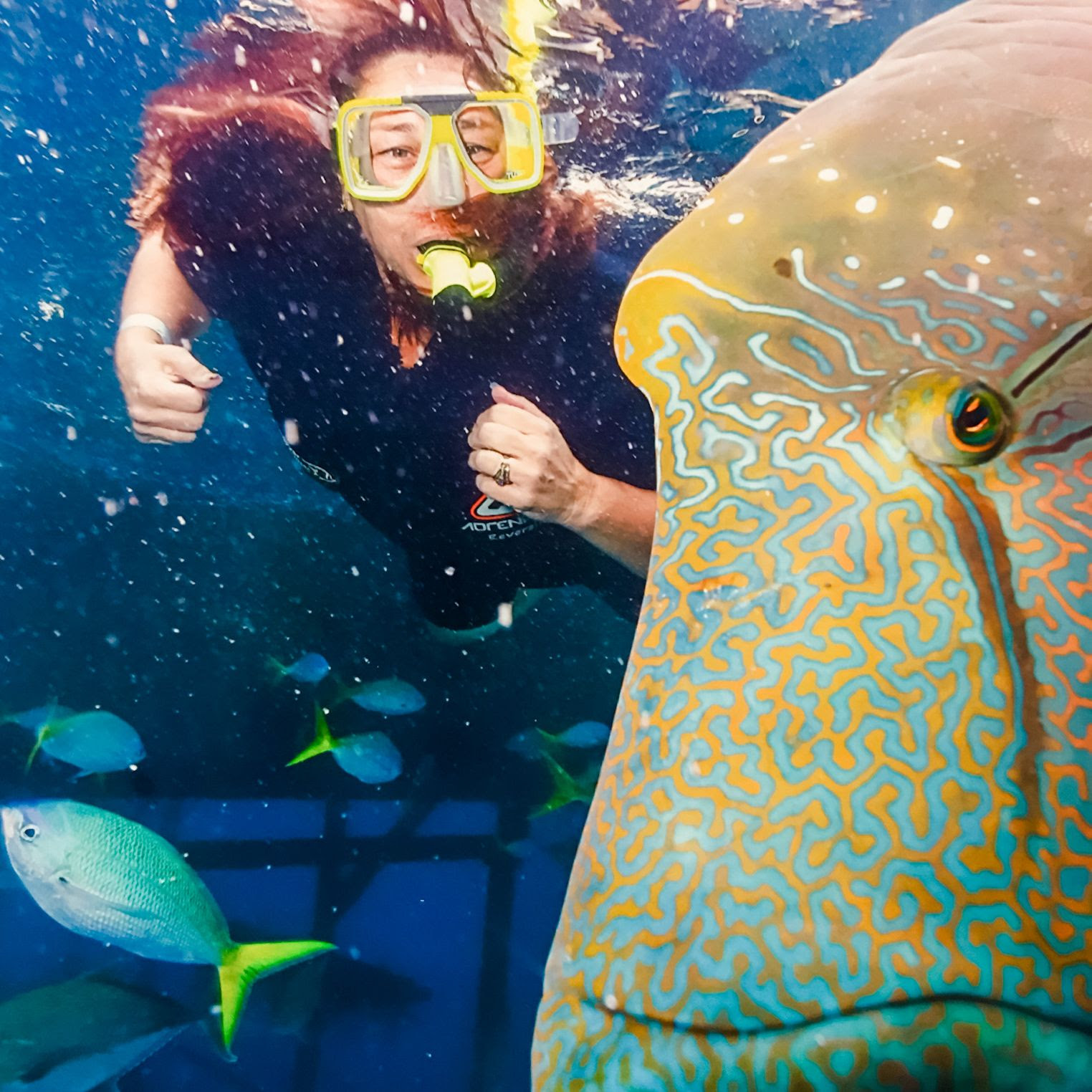 What would daydreaming about travel be like without inspiration from Cheryl Siemers of 5 O’Clock Somewhere Travel and Cruise?

An industry veteran, Siemers loves to impart her knowledge and passion for travel and learning about new cultures and places into her hometown.

She’s spent many years traveling the world over and exploring every nook and cranny of the United States, Mexico and the Caribbean as well as Dubai, Europe, South Pacific, Australia and many more countries. As the travel industry makes a roaring return, Siemers is working overtime to make sure her clients have the best possible travel experience.

To book your next trip, visit 5oclocktravelandcruise.com. 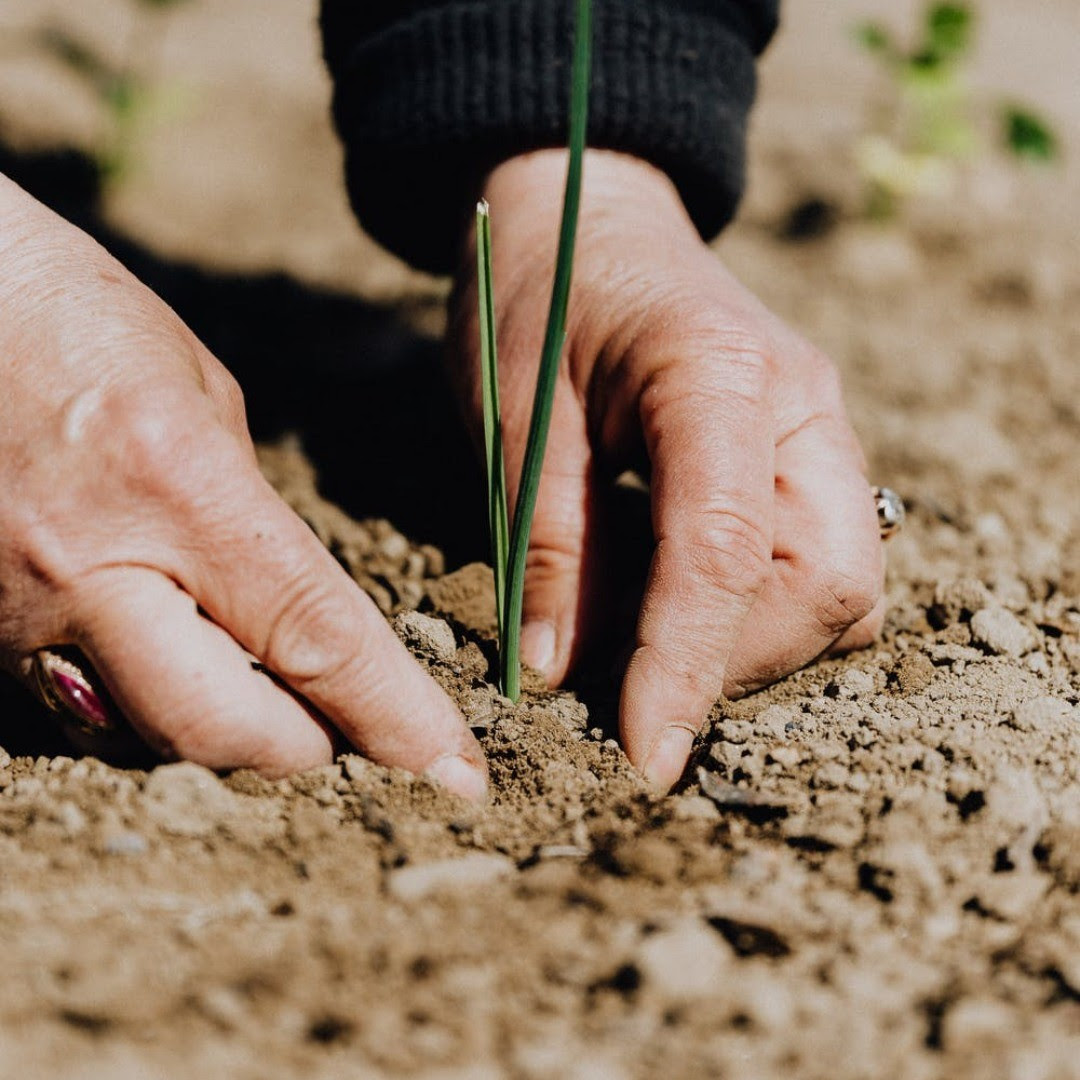 Michael Fields Agricultural Institute, a non-profit organization, has been a leader in the movement for profitable, environmentally sound, socially responsible, and sustainable agriculture since 1984.

Stop by and see its beautiful East Troy campus, located at N8030 Townline Road – whether at an event, workshop, field day, art exhibit or a quick visit, the public is always welcome. For more information, visit michaelfields.org.